“Don’t be evil” was Google’s motto of corporate code of conduct, and it was first introduced around 2000. It was proposed by Googler Paul Buchheit when Google was still finding its footing. 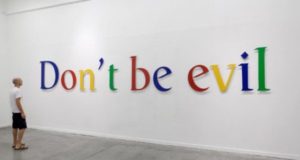 The “Don’t be evil” was obviously well-intentioned but, in the same time, it provided an easy way for people to name the search giant a hypocrite anytime it took controversial actions towards its users.

The most famous example is Steve Jobs calling the slogan “bullshit” during a heated talk about Apple’s rivalry with Google.

After Google’s corporate restructuring under the conglomerate Alphabet Inc. in October 2015, the slogan changed to “Do the right thing” as its motto with the original motto retained, however, in Google’s code of conduct.

“Employees of Alphabet and its subsidiaries and controlled affiliates should do the right thing—follow the law, act honorably, and treat each other with respect…” the new code reads, noticeably dropping the famous motto.

Other Google slogans you may find online are obviously funny/honest advertising variations. 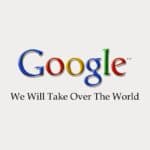 Google We Will Take Over The World Slogan 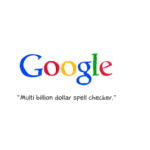